run for your life.

Well, it finally happened folks. This nonathletic, can't-run-to-save-her-life-from-a-wild-bear girl, just ran, walked, ran-walked a 5k in the name of color, happiness, and life.  We woke up before the crack of dawn, last weekend, and made our sleepy way into the city to embrace all that the Color Run had to offer. Aside from getting lost in the sketchiest of allies, and spending half of our morning standing on a jam-packed sidewalk waiting for our portion of the race to begin, it was, without a doubt, a fabulous time. 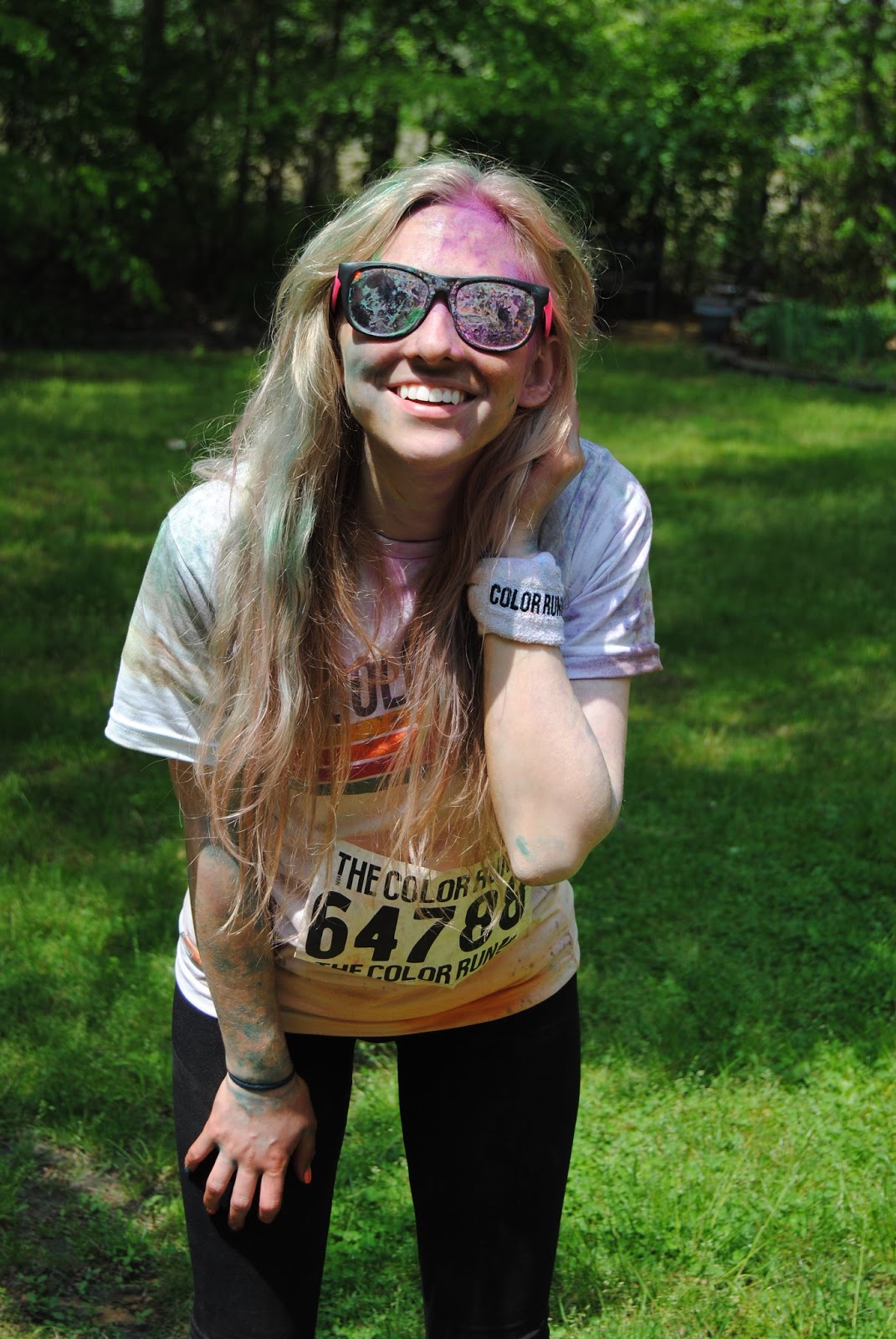 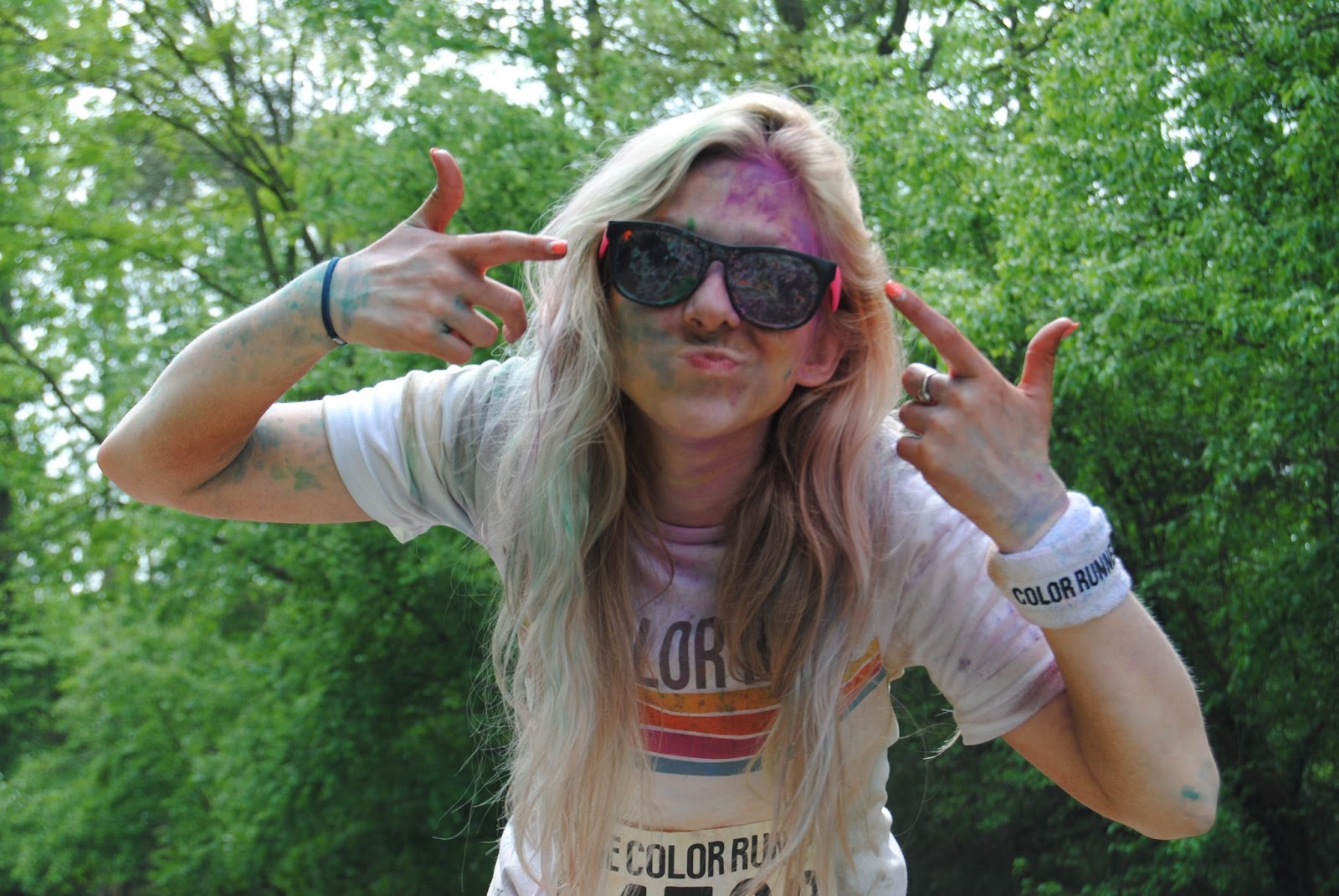 Participating in the Color Run has been on my bucket list for years. First of all, the idea of me running a 5k, or running any distance past my mailbox at all for that matter, was a goal in itself. Not to mention the "happy" atmosphere, and the end result of looking like a crayon box of color. I mean, who wouldn't want to wash color out of their hair for the next 2 weeks? To top it off, all of the proceeds for this party of a run were donated to a children's cancer support fund: The Cool Kids Campaign. Cool, right?

If the color run is on your bucket list, my advice to you is: 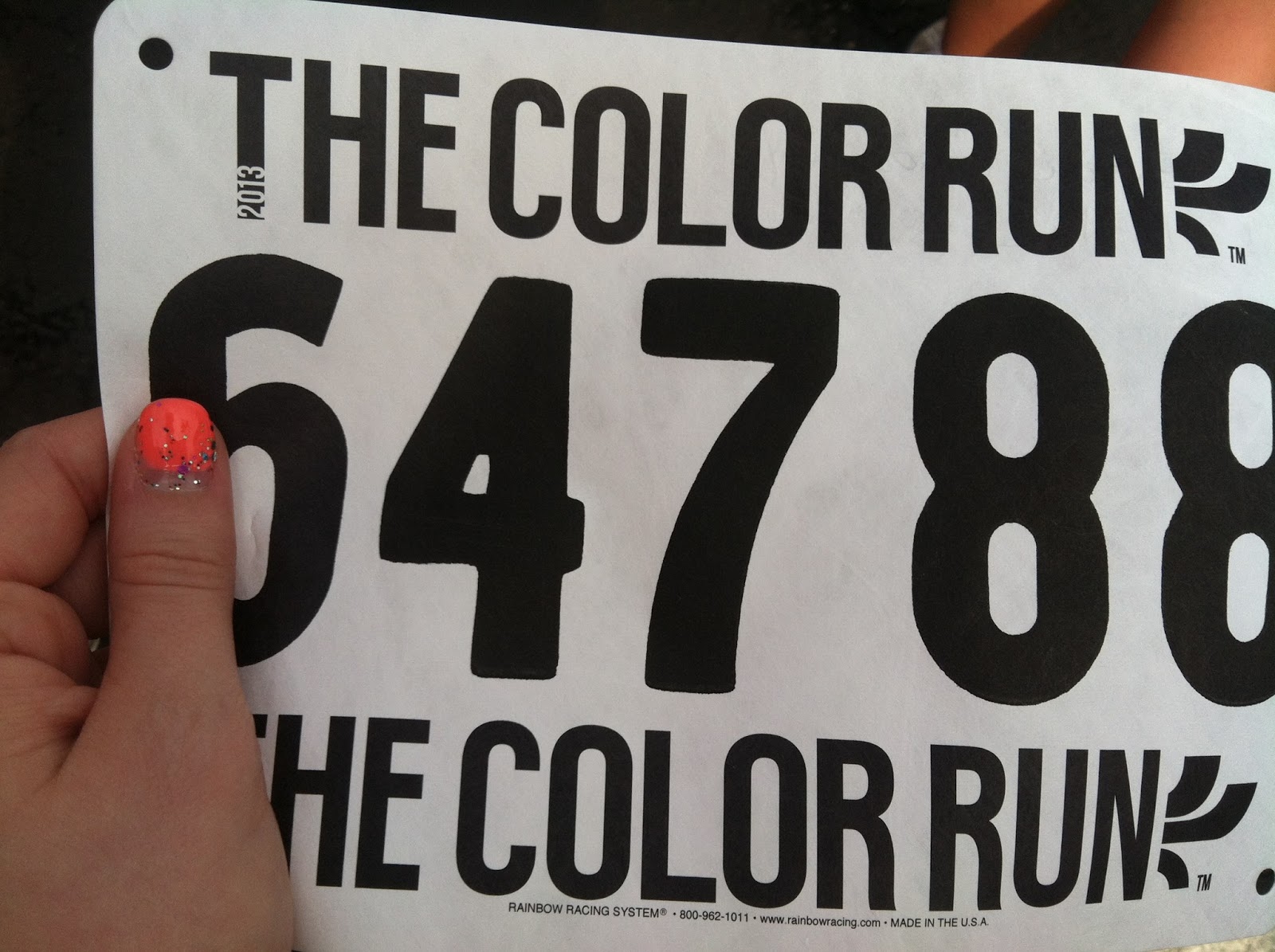 1. Sign up early - After a few tries of signing up near-deadline and being wait-listed year after year, I finally was able to sign up with a group of girls to tackle the Color Run in a city that wasn't too dreadfully far. (Let's face it: everything is a drive for me. It takes 40 minutes just to drive to the nearest wal-mart for Pete's sakes). But in order for that to happen, we signed up 4 months in advance. 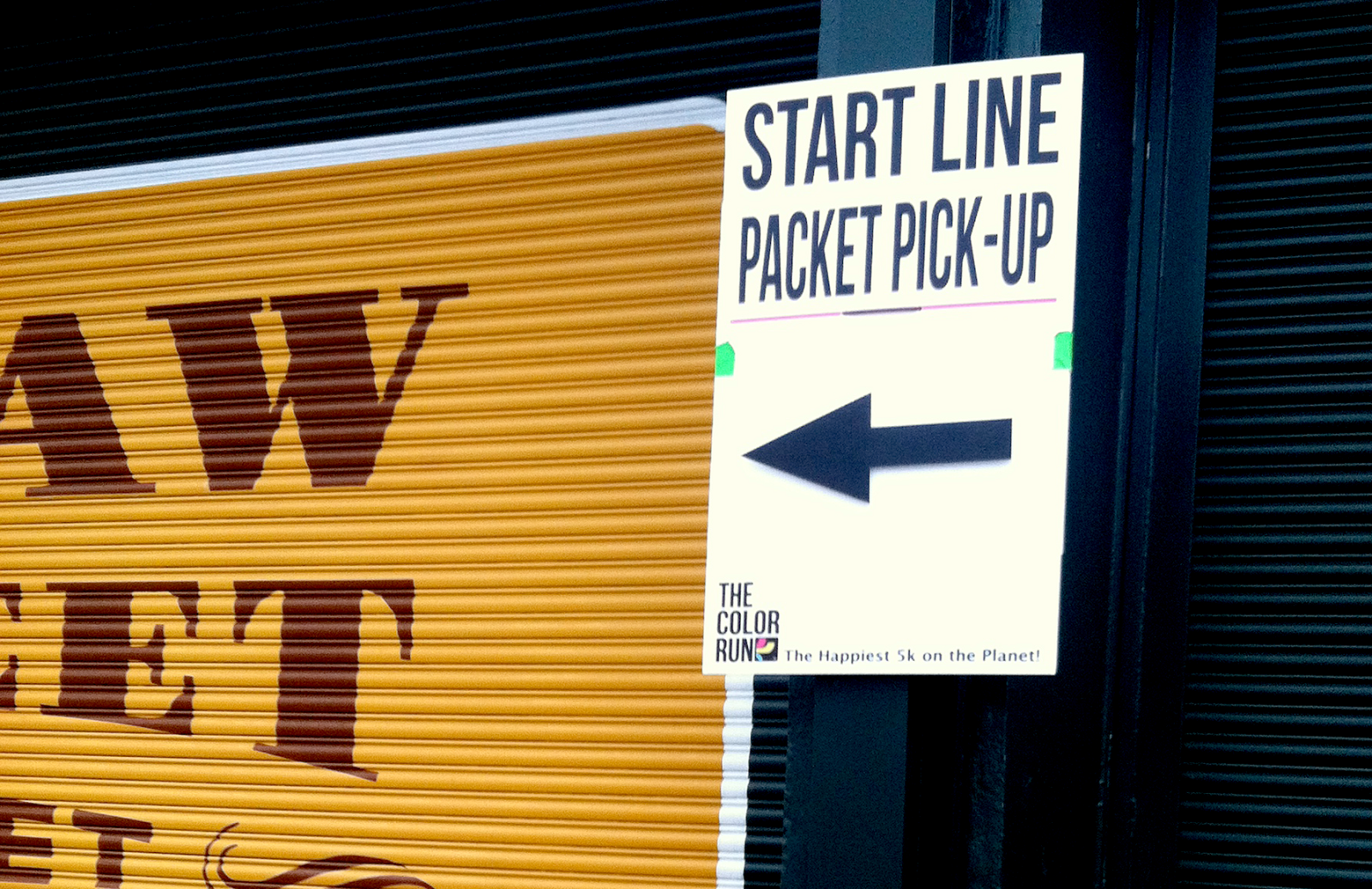 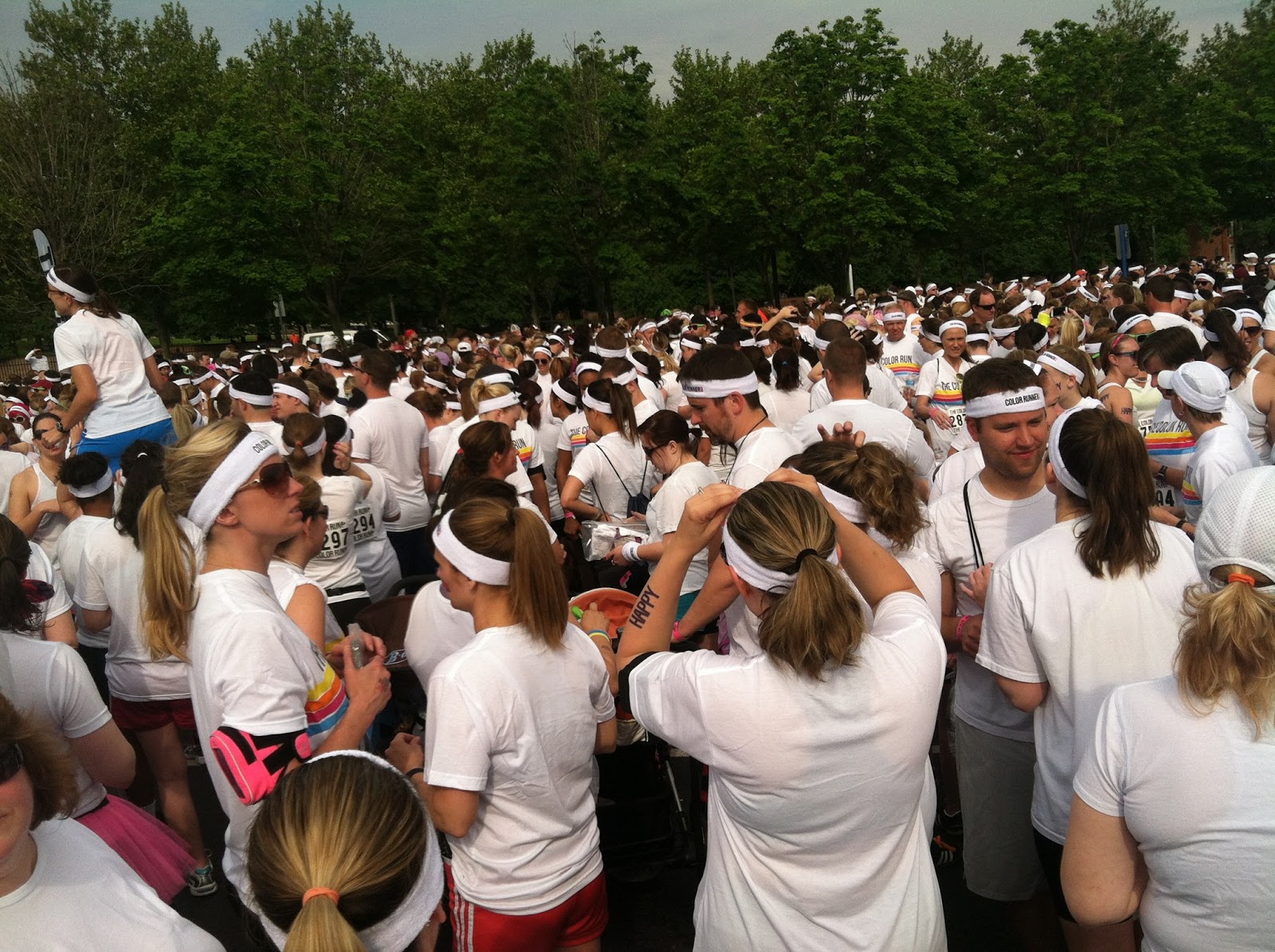 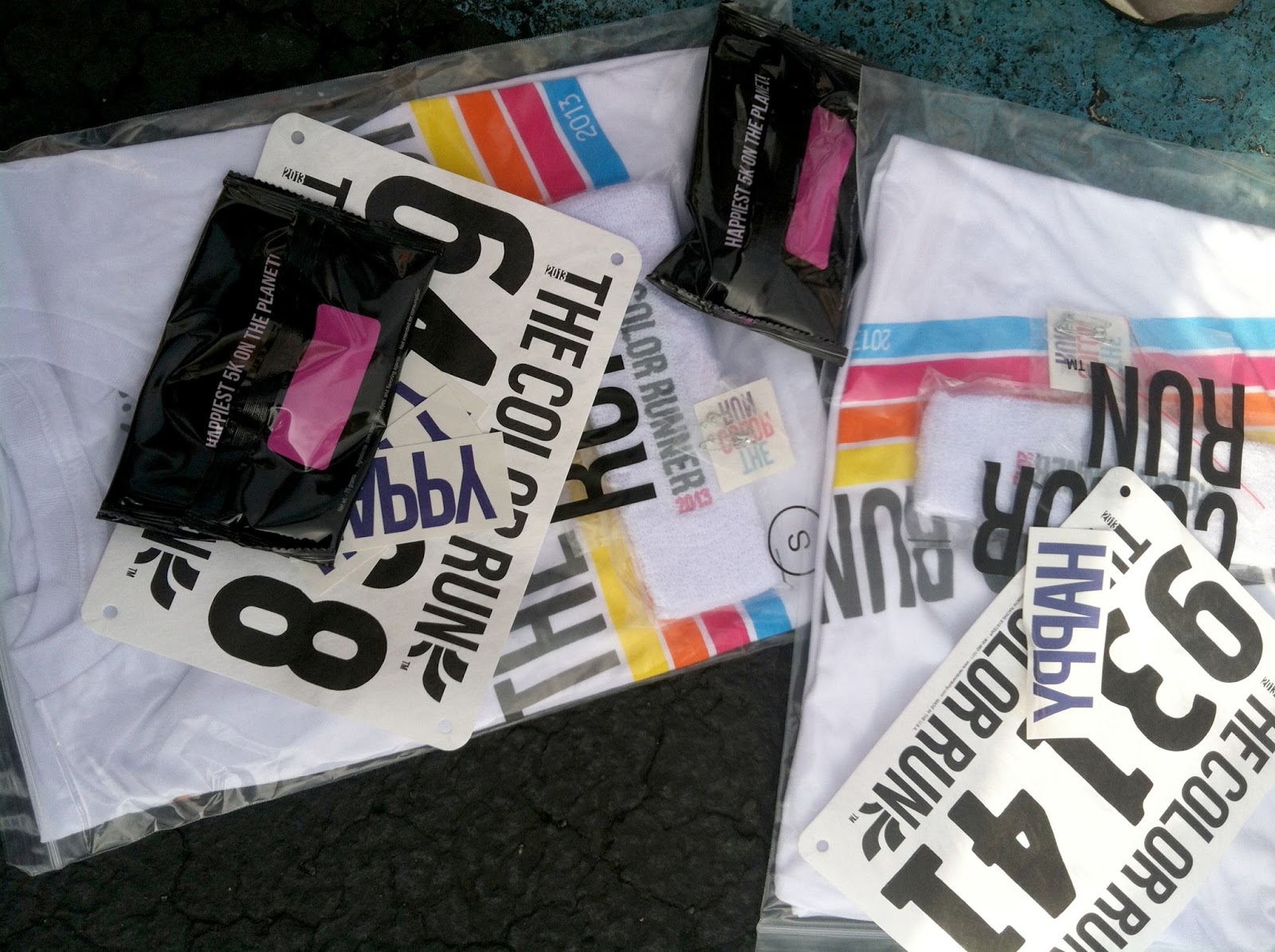 2. Pick up those race packets! - Because we were student teaching during normal business hours, we chose to pick up our race gear the morning of the race. Big. Mistake. We waited in the line for about an hour. Which was okay, because we expected to be in lines since there were 25,000 participants that day. But the lines we were waiting in were often made up of disoriented racers who were in the wrong place, or runners just wanting to check in. Had there been clear markers and separate lines, I'm sure the processes would have been so much quicker for everyone running that day. 3. Know where you're going...and parking - If I'm being honest, my directional skills are... well... let's just say that if I leave home without leaving a bread crumb trail, I might never make it back. Even though we used a GPS that day, and had been into the city before, we sort of became dreadfully lost about 20 minutes from check-in time. We ended up down an abandoned alley way, and played street-jumping-frogger just to get where we needed to be. Scary. Stuff. As far as parking goes, we attempted to plan early, and had pre-purchased a parking ticket for a local parking garage before race day. However, the signage on the garages wasn't star quality and we ended up parking in the wrong building. Needless to say, we bounced back and forth for 45 minutes after the race between where we should have parked, and where our car actually was. I need a map... 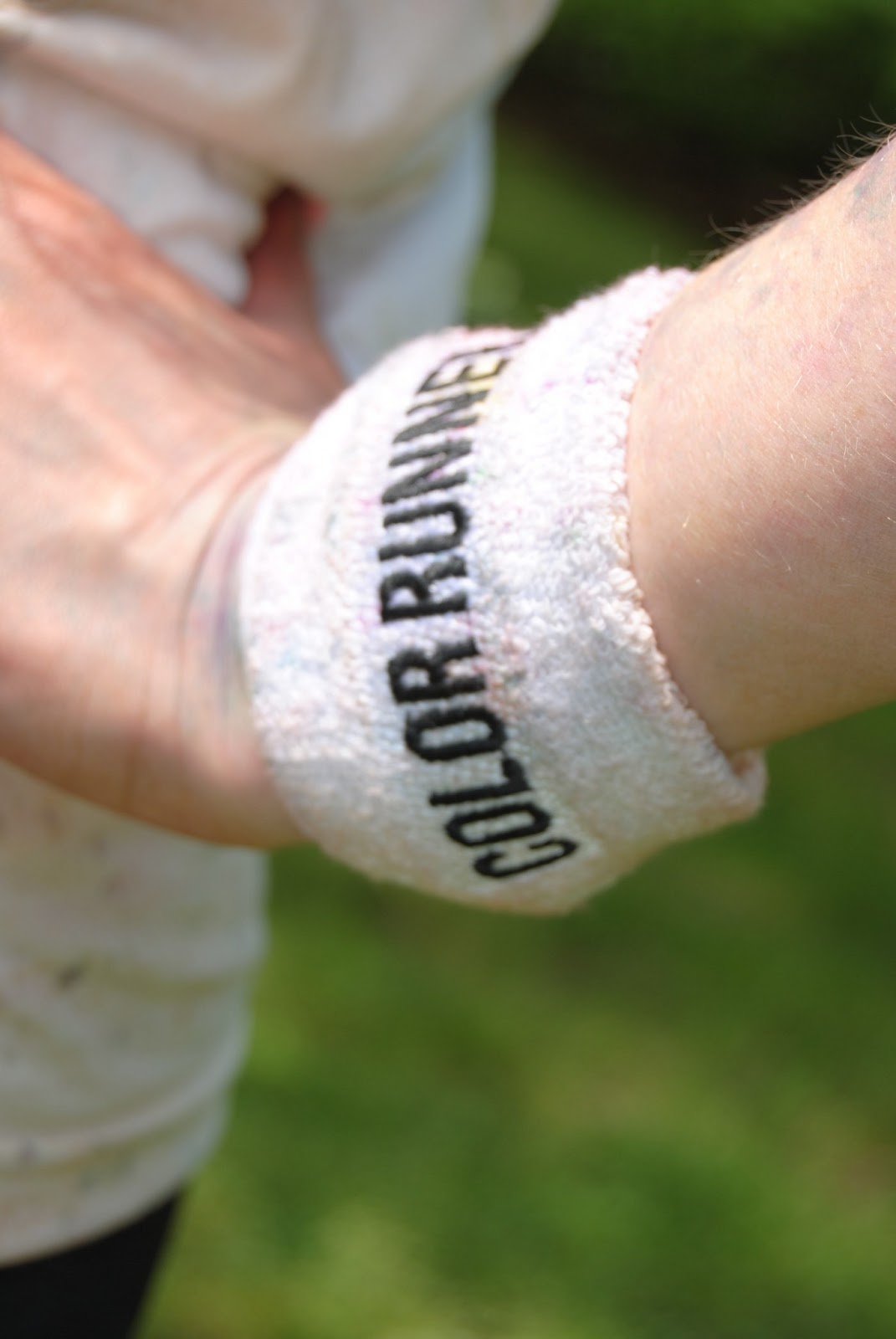 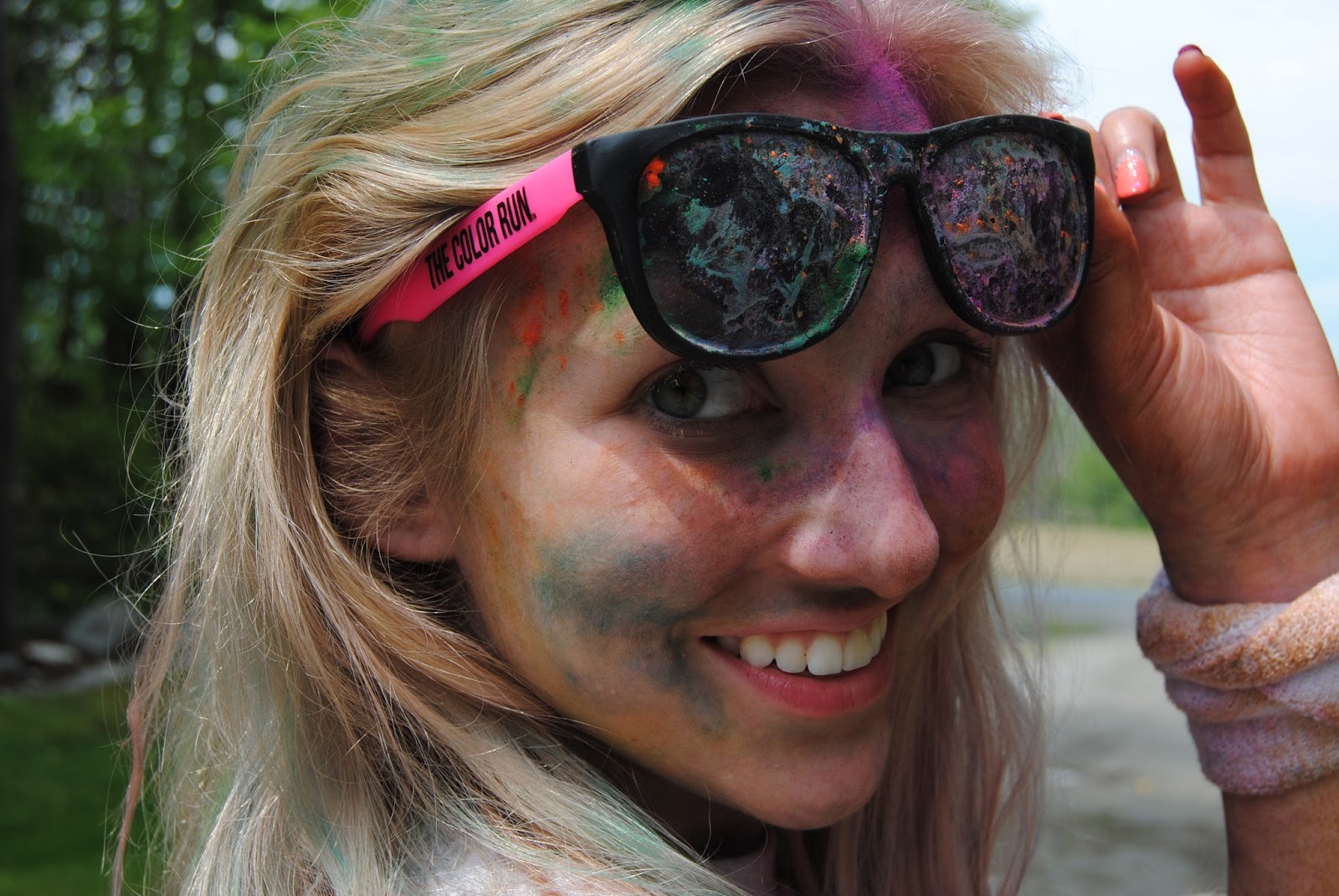 4. Gear is a MUST - The weather man was calling for rain all morning, but I brought my sunglasses just in case. And, boy, was I sure glad I did. The color that the volunteers toss at runners is a loose powder, that loves finding its way into eyes and mouths. Having those glasses handy was great while running through the color stations, even though there wasn't a lot of sunshine. I also invested in a Color Run fanny pack (don't laugh!), for our car key, ID's, my phone, and our color packets. Things I wish I brought: a bottle of water for temporary tattoos, and a bandanna to run through those color stations Western Cowboy style. 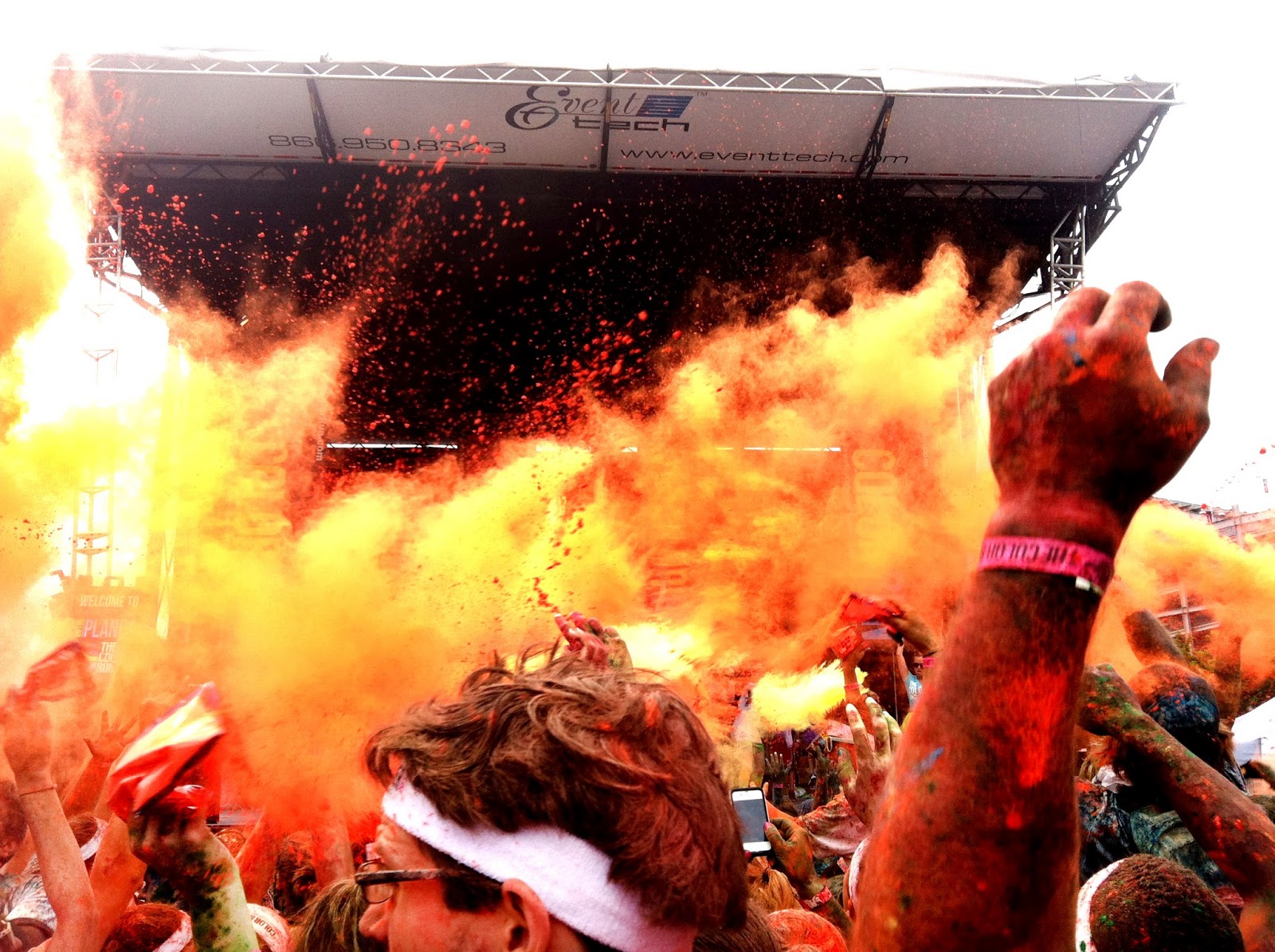 5. Don't be afraid to get your groove on and enjoy the ride - This race was perfect for my first 5k. We ended up running the majority of it, but found it difficult to run the entire time, not just because we are running amateurs, but also because there were so many participants of all ages and running backgrounds that participated, there was often a stroller or a wagon or a group of walkers hanging out on the race way. But I thought the family-oriented atmosphere was perfect. And the colorful dance session after we crossed the finish line? Sweeeeet! Save your race packets for this one! During mid-groove, it's kind of an amazing sight to see everyone's color packets shaking out all over the skies at the same time. 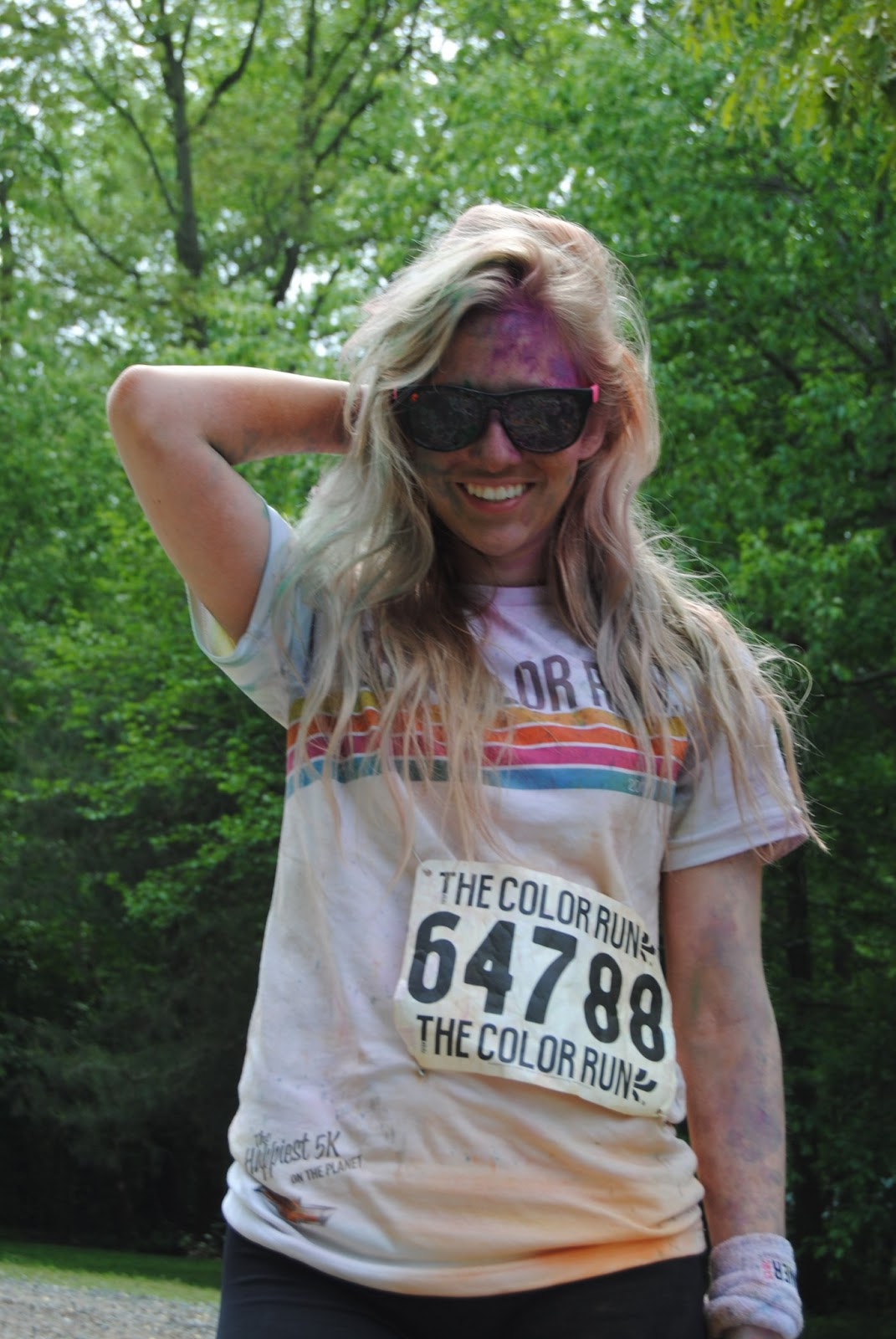 So what are you waiting for?? Grab a team of your best buddies and go and get your run on!